Very recently Microsoft released the long awaited *Copy Plan* feature in Microsoft Planner. This was one of the most requested feature on planner user voice and it’s pretty easy to understand! Having created a numerous buckets and tasks, and then want to reuse this for another project or similar, meant starting out  from scratch with a new plan, building all the buckets and adding tasks.

With this release, the option to copy a plan makes it easy to copy over all the buckets, tasks, descriptions and flags! In the process you create a new plan (and group) with the option to name it at your will.

Here I have a plan I want to copy: 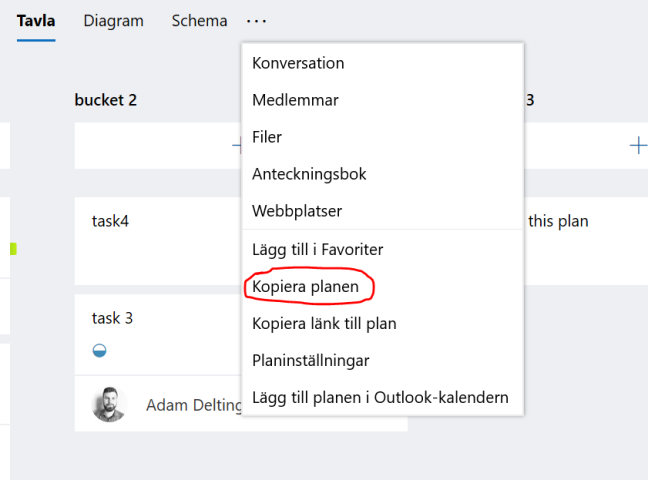 Now you are promted with this window. What this does is actually creating a new plan with the copied content. Name the new plan (Choose something you’d want to name your team) and pick whether this should be a private or public plan! When you create a team later it will have the same setting. This can of course be changed later also

Now, go to MIcrosoft Teams and click “Join or create a team” -> “create team” You will be promted with the option to create a team from scratch or from an existing team or group. Since we created a new plan when we copied the plan, an Office 365 group was created behind the scenes! We want to use this one so pick the later.

As you can see, you now have the ability to create your team based on the group you created from Planner. Choose the group and click ok!

A new Team will now be created using the same group with the copied Planner plan. Now all you have to do is to create a new Planner tab from a channel. Choose to use an existing plan. You will see the plan you created:

Here you go! My copied plan in a new team. As you can see my assigned user is gone along with due dates, comments and attachments! Add your members to the team and start planning!!

Microsoft is currently working on doing this from within Teams!

It would be really nice to just copy all the content in a plan and add to an existing plan instead of creating a new plan/group!

Also, we need better support for doing all this programatically.

If you have a large Planner plan, this is a great feature to use when you need a new team with the same Planner setup! As I mentioned earlier we lack some things for it to really become a killer feature, but it will be really useful to many already!

5 thoughts on “Copy a Planner plan to a new team”